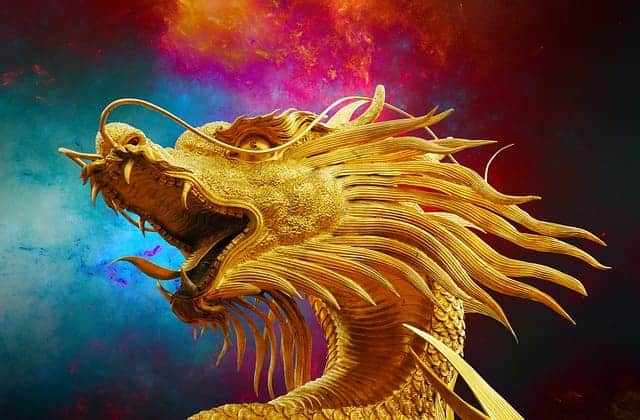 What is a Chinese dragon? 🐉

The Chinese dragon is an animal with a snake’s tail, dog’s muzzle, deer’s horns, lobster’s eyes, lion’s mane and eagle’s claws. It can be said that it brings together several animals in itself.

The Chinese dragon in mythology

Its origins are still uncertain and we have several academic opinions. Some believe it originated from the snake or Nüwa, a mythological goddess with snake tail and human torso. Others believe that the long was formed by integrating the symbol of several tribes that united in the past into a single animal.

The people of the Chinese people began to make offerings to this mythological being in times of drought as it was believed to bring rain, as for example in the legend of the creation of the Chinese rivers.

Then, ceramics and other utensils began to be decorated with the figure of the dragon, as a symbol of good fortune, greatness and wisdom.

The Chinese dragon, unlike the Western dragon, is a kind and wise being, not the representation of evil. It makes crops thrive, not destroys them. The dragon is an aquatic being, living in seas and rivers, so it does not spit fire. It has no wings, but it can fly with its magic.

The 9 Types of Chinese Dragons 🐲

There are 9 types of Chinese dragons, as the number 9 is sacred and is related to the yang (the white part of the emblem of Taoism, yin and yang) ☯.

The dragon of the Chinese horoscope 🐉

The dragon is one of the most important mythological animals of the Chinese horoscope. Symbolizing fortune and good luck, people born in the year of the dragon are usually charismatic, strong in character, proud and noble. But also sentimental and generous with the family and people most important to the sign of the dragon.

The importance of the dragon in Chinese culture

The long were highly revered by people, so much so that even today the dragon dance is performed (dance performed by several people who hold a dragon making it move). This dance can be seen at the Chinese New Year festival.

Because they were so revered, the Chinese emperors (from the Han and Qin dynasties) took the dragon as an imperial symbol and even forbade others to wear the dragon symbol (which is why the Communists later associated the Chinese dragon with imperialism and tried to impose the panda as a symbol).

The Chinese claimed (and say) to be the descendants of the dragons themselves. They are still depicted as sculptures protecting homes or businesses and as graphic design on any type of Chinese product. They are still held in high esteem.