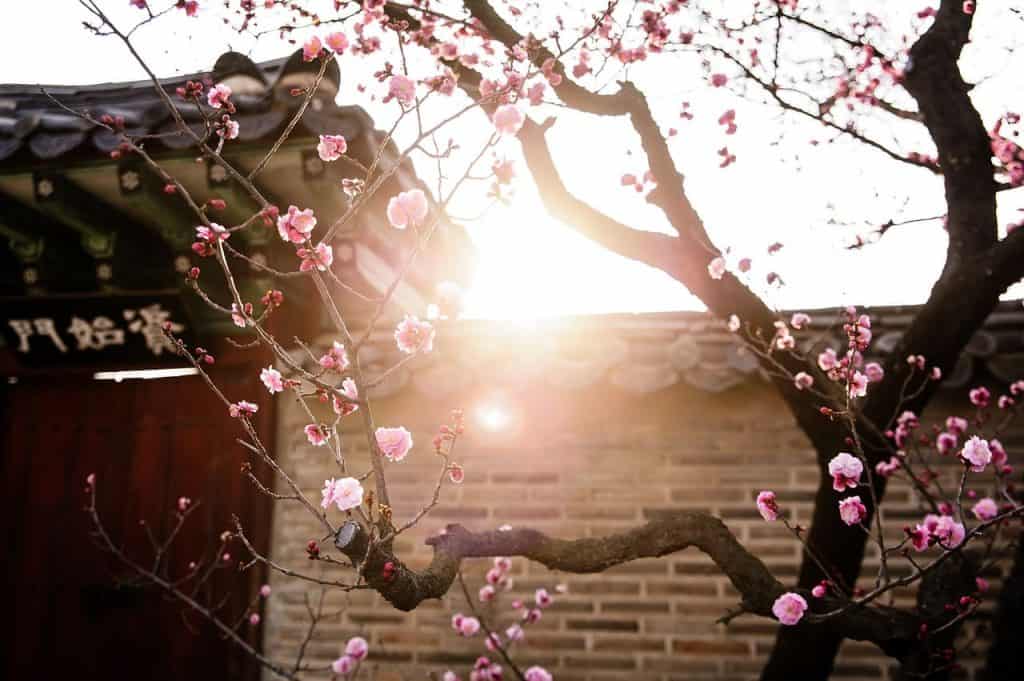 In each culture, there are certain plants or flowers typical of it. Sometimes, with certain customs associated with them or certain meanings. Chinese flowers are one of the most significant in the world.

Chinese culture has a wide range of typical and significant flowers, which we should know when reading Chinese poems or novels. In addition, some of them should not be given to the Chinese, for the meaning they carry.

Chinese plum blossoms are one of the most representative flowers of China. Their meaning is strength, pride and moral integrity. And it is because these flowers bloom at the end of winter, when there is still snow. Producing a contrast of colors between the white of the snow and the red (or pink) of the flowers.

They are also very appreciated for the intense and pleasant aroma they give off. However, they are not usually given away because their pronunciation is reminiscent of the word “bad luck”.

The lotus flower has always impressed the Chinese with its ability to bloom in clay, where no other flower so beautiful can bloom. In other words, they grow in adversity without their beauty being corrupted. That is why they mean virtue and purity, the permanence of ideals in the face of life’s difficulties.

They are usually given as a gift in the face of a work success, because the hard work of the person given as a gift has meant their success and virtue. Also to the girls, with the desire that they remain tenacious with their ideas.

This flower is also strongly linked to Buddhism. In fact, Buddha is usually depicted sitting on an open lotus flower. Depending on the color of the flower its meaning takes on different connotations, for example, the blue lotus indicates wisdom and the red compassion.

These Chinese flowers symbolize prosperity, happiness and good fortune. For this reason, many people hang pictures of peonies in their homes, wishing the happiness of their families.

There is a legend about peonies that says: Empress Wu Zetian was going for a walk in the garden of Shangyuan. So she ordered all the flowers to bloom at night. The next day, all the flowers had bloomed, except the peonies, who ignored them. The empress, enraged, ordered them to be burned. But then, it turned out that they blossomed even more beautifully.

In Chinese culture, orchids, by their simplicity and beauty, symbolize elegance, simplicity and good taste. It relates to refined and honorable people who are without seeking fame. They are given as a symbol of respect and admiration for someone.

These Chinese flowers represent romantic love in Chinese culture. They are the equivalent of red roses in the West. They also symbolize good temperament, generosity, elegance and beauty. It is considered a flower that shares its beauty with the other flowers of the same tree, so they are given a meaning of generosity and true love and not possessive.

The Chinese flower of chrysanthemum means personal dignity and the action of prioritizing good morals to other interests such as political or economic interest. It is not given to other people because of its widespread use in Chinese funerals.

These asian flowers are very important in Japan, as they are the symbol of the Japanese imperial house and the “chrysanthemum throne”.

Although not a flower, bamboo is one of the most important Chinese plants in Asian culture. It symbolizes straightness, firmness and modesty as it remains straight and of the same color all year round. When a person begins to reap success in his life, he is usually given bamboo with the desire not to lose his modesty.