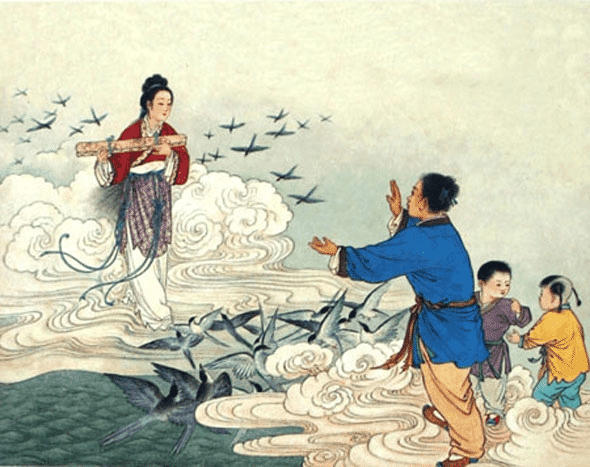 The Qi Xi originates from a very romantic myth of Chinese culture: the myth of Niulang and Zhinu. This myth is closely related to a constellation of stars: the constellation of the Summer Triangle.

The myth of Niulang and Zhinu is almost 2,600 years old, the oldest reference of this myth we have is the “Classic of Poetry” or “Shi Jing”. Supposedly written by Emperor Xanlong, a book belonging to the Five Classics of Confucius.

This myth caused the festivity of Qi Xi, which although it does not remain intact, is still celebrated today. The myth was transmitted from China to Korea, and later to Japan, so the myth did not remain unchanged, but underwent several changes in the destination countries.

The myth of Niulang and Zhinu 🎎

This myth is about the love story of a weaver (Zhinu) and a rancher (Niulang).

Niulang meets seven goddesses bathing in a lake and steals their clothes. The goddesses, who are sisters, send the youngest of them to ask Niulang for the garments. Upon seeing her naked, she falls in love and decides to marry her. According to Chinese tradition, if a single man sees a naked woman, he has the right to marry her.

They get married and they’re a happy marriage. They also have two sons, but a superior goddess (the goddess of heaven) is furious when she realizes that a human has married a goddess. So he decides to separate them. To do this, he creates a river of stars (The Milky Way) with his pin.

Niulang stays on one side with his children and cattle, while Zhinu stays on the other side with his loom. Both are very sad. Some magpies pity them and form a bridge once a year on the seventh night of the seventh moon so that they can see each other.

What does the myth of Qi Xi try to explain? 🙄

The star Deneb corresponds to the goddess of Heaven, which is situated on the arm of the Milky Way, since it is she who creates it. In addition, the magpie bridge is located in the constellation Cygnus. And the sons of Niulang and Zhinu correspond to the stars β and γ, which are located near Altair.

The Qi Xi festival in antiquity and its traditions 🎆

The name of this festivity, Qixi, means night of the seven, for the day in which it is celebrated. Seventh day, the seventh lunar month. The oldest document found concerning the Qi Xi festival dates from the Han dynasty. Some ancient paintings are still preserved.

In this image of the Qing dynasty, a tradition is shown in which women threw a sewing needle into a bowl full of water. If the needle floated, it meant that the woman was a good seamstress.

Other traditions included embroidering or carving melons and watermelons, so that women would demonstrate their domestic skills. Zhinu was also offered facial powder, which at night was spread half over the roof. And the other half was distributed among the girls so that Zhinu could give them beauty.

Another tradition is to place a garland in the courtyard of their house as an offering to Zhinu and Niulang. Some of these traditions are still preserved, especially in rural areas.

The festivity has evolved in such a way that more than a day for women, it is considered a day for couples, and is even known today as the “Chinese Valentine’s Day“. Currently on this holiday couples light lanterns in rivers and lakes, and give each other gifts.

In China today, Western Valentine’s Day is more famous than Chinese, especially among young people. Lately, however, provincial and local governments have been promoting this festivity as a symbol of identity of Chinese culture and as a way of separating it from the Western festivity.

This festivity has been declared National Intangible Heritage by the government of the People’s Republic of China. This is a very popular date when many people ask their partners to marry or even get married on the same day.

Comparison of the myth of Qi Xi between China, Korea and Japan 🎐

In the Chinese myth, magpies are the only birds that create a bridge between Zhinu and Niulang. In the Korean holiday, however, they are crows and magpies. It is also said that magpies and crows do not have feathers on their heads because lovers pass over them according to Korean tradition.

In Korea, from this day on, rain is called Chilseok water, which represents lovers’ tears. Korean history varies in that Jiknyeo is the daughter of the king of heaven and falls in love with Gyeonwu as she looks out the window. And after getting married they neglect their jobs because she stops weaving clothes and he takes bad care of his cattle. This is why the King of Heaven punishes them by living apart and meeting only on the seventh day of the seventh lunar month.

During Korean celebrations they take baths for good health and eat foods and sweets made from wheat. This is the last chance to eat wheat before it spoils.

The Myth of Qi Xi in Japan 🎋

In the Japanese myth Orihime was sad because of his work and because he could not have a partner. So his father made an appointment for him with Hikoboshi. After this they fell in love and got married. When they got married they neglected their work and Orihime’s father separated them with the Milky Way.

At the festival, the Japanese write their wishes on colored paper and hang them on bamboo branches that the higher the chances are that these wishes will be fulfilled. The next day the bamboo and Tanabata ornaments are burned or thrown into the river.

In Japan there are places where festivals are held and where competitions and contests are held. Streets with shops are lushly decorated.