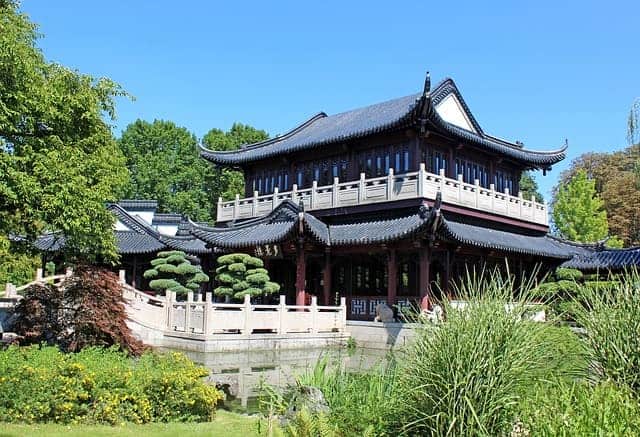 Traditional Chinese houses often come to mind when we first think of Chinese culture. Although we don’t really know at all what kind of house each is.

But they are all easily recognizable as part of Chinese architecture. Whether it’s their distinguished roofs, their colors, their doors, and so on.

In this article I will try to summarize the most famous and typical Chinese traditional houses of the country.

There are countless types of traditional Chinese houses, both old and new and modern models. Virtually every province and region of the country has different old Chinese houses.

Depending on the terrain, the material, the time, and the climate, they were built in one way or another. It should also be borne in mind that China’s many ethnic minorities build their houses in different ways.

Some have nothing to do with the typical Chinese traditional house, an example of this are the Tulou of which we will talk later. The houses in China are among the most varied in the world.

Siheyuan is the typical Beijing courtyard house. These houses are very common throughout northern China. The Beijing Siheyuan revolves around the courtyard. In fact it could be said that it is a courtyard house.

These traditional Chinese houses are built on a horizontal axis with the main door always facing south, according to the principles of Feng Shui. Once you crossed the main door some found in a small room intended for visitors.

Further ahead was a small narrow front courtyard. Next to this courtyard were the rooms, the office, the warehouse.

The further you went into the house, the more private the room in question became. The closer you were to the family, the more they let you into the house, allowing you to be received in their second courtyard.

For thousands of years, the Chinese of the Loess Plateau have built their houses in caves called Yaodong. These Chinese houses are built vertically downwards forming a sunken courtyard that has horizontal and vertical rooms on its sides.

The Loess plateau has a fertile clay soil, which makes it very useful for both cultivation and digging. That’s why the people who lived in that part of China decided to make their houses under the soil instead of on top of it, because it was easier.

Chinese Yaodong houses protect from both cold and heat when they are underground. The houses are accessed through an underground tunnel or an outer corridor. In the north there are villages where there are only Yaodong cave houses, which are very attractive for tourism.

The Fujian Tulou are traditional dwellings from southwest China built by the Hakka minority. These Chinese houses were built between the 12th and 20th centuries in the Fujian and Guangdong regions.

They are large segmented houses made of land in which several families live. The family rooms are arranged vertically and all face the large inner courtyard, which is usually round or rectangular.

The inner courtyard of the tulou may be “empty” or full of other smaller communal buildings. Such as food stores, farms, schools, markets, etc….

Some tulou tend to become real tourist attractions during the May festivities. The families who still live here charge tourists to come in and see the tulou. Many of them have been declared World Heritage by UNESCO.

The Lilong was a type of neighborhood that characterized Shanghai during the twentieth century, influenced by the barracks of the English concession. They were the first models of mass housing in China.

The Lilong appeared as a response to the increase in Shanghai’s population in the mid-19th century (as a result of people fleeing the Taiping Rebellion). And also to house workers’ residences due to recent industrialization.

As housing they were small courtyard houses arranged in a row, facing south, with one or two main alleys that served as shops and shops. They had a stone façade at the entrance to the neighborhood, and other secondary alleys that were for domestic, semi-private use.

The alleys are part of the house, where food is prepared and children are raised, but the interior of each house is private.

Diaojiaolou are ancient Chinese houses built by the Miao minority in southwestern China. They are usually built of wood near mountains and rivers, usually with an extended floor space.

At first glance it seems that these houses are going to fall as they are supported by simple wooden columns. But in reality they are quite resistant. The ground floor is usually used as a warehouse, while the second and third floors are for the inhabitants of the house and their families.

Legend has it that these houses were built one floor above ground level because their first inhabitants had to defend themselves from wild animals. And this was their way of doing it.

Chinese architecture in reference to their houses has changed a lot throughout history, more so than we have been in the last century. The majority of the Chinese population of cities now live in flats of large apartments or skyscrapers, like most of us.

However, some modern Chinese architects have wanted to mix the traditional with the new in many of their projects. One of the most famous is the Tea House project, a house located south of Tiananmen Square.

The main characteristic of this house is that it is traditional on the outside and modern on the inside, mixing the old and the new as almost always do the Chinese and Japanese world.