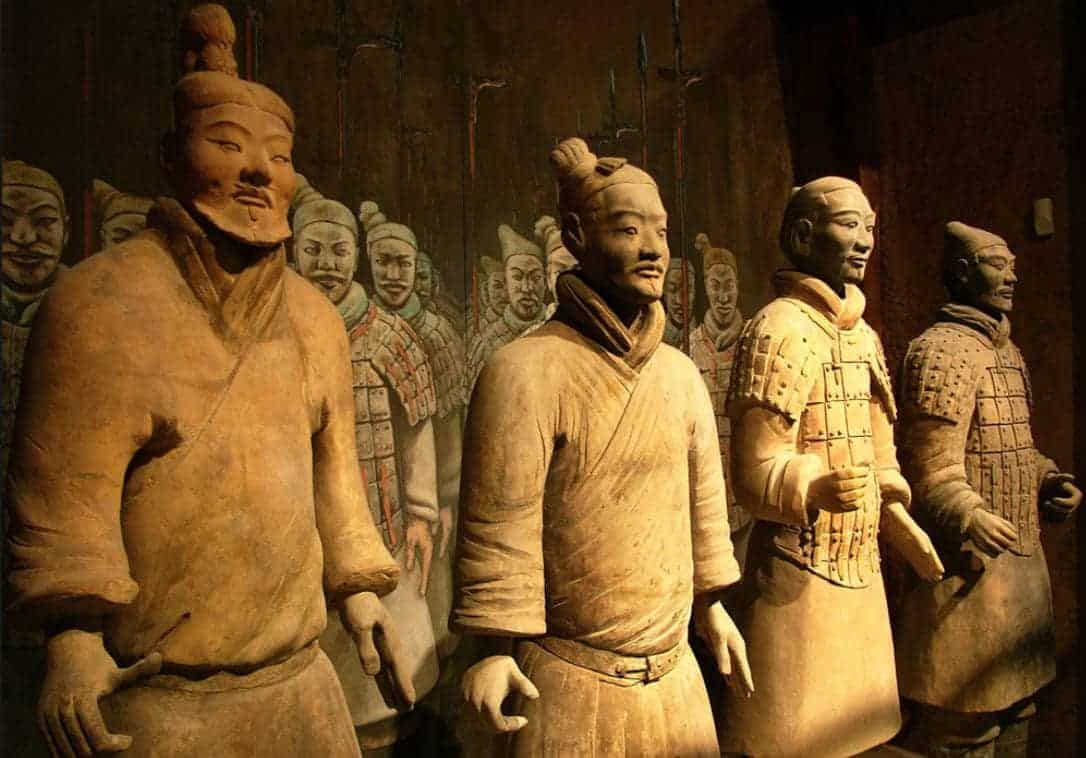 Chinese dynasties comprise most of China’s history. Due to their long extension in time (about 4000 years), it is impossible to explain them all in the same article. So we have decided to create this summary of Chinese dynasties to serve as a guide on our website.

China’s first dynasty was the Xia. This dynasty is currently considered as “semi-mitological”. According to the historian Sima Qian in his “Historical Memories”, the Xia dynasty had 17 kings.

According to the accounts, the last king Xia, Jié, was a tyrant who oppressed and enslaved his people, which precipitated the dynastic change.

The Shang Dynasty is the first modern historians to confirm its existence, due to important archaeological sites found in the Yellow River Valley.

Their capital was in Anyang, and it is known that they knew the metallurgy of bronze and techniques of jewelry and armoury. It was a highly hierarchical society, with slaves, soldiers, aristocrats, and priests. At the top of the pyramid was King Shang.

This dynasty stood out for its warmongering, since hundreds of Shang burials with dozens of weapons and human sacrifices have been found. The most famous is that of Fu Hao, a warrior queen or princess of the time.

Undoubtedly one of the most important dynasties in China. The Zhou dynasty contemplated the birth of the two most relevant Chinese thinkers and philosophers, Lao Tse and Confucius.

With them, Taoism and Confucianism spread throughout China, in addition to other ideas and new religions, such as Moism and legalism.

The Zhou were also the architects of the principle of the Mandate of Heaven as a form of justification of the power of Chinese rulers and, paradoxically, of dynastic change and the right to internal rebellions.

It was the Qin dynasty that initiated the so-called “Imperial Era” in China. As its first ruler, Qi Shi Huang Di, became the first emperor of China and founder of one of the major Chinese dynasties.

Thanks to his enormous authoritarianism, Qi Shi Huang Di not only managed to unify all of China, but also to begin the construction of the Great Wall of China, the “Terracotta Army” that would guard his tomb, and the hatred of most of the Chinese people.

One of the most important traditional Chinese dynasties was the Han dynasty. During this time Confucianism is promoted, paper is invented, and the Silk Road is opened by the hand of Zhang Qian by order of Emperor Han Wudi.

The Chinese border crosses the Yangtze River for the first time, even reaching the Pearl River in Canton. In addition, in 1997 an attempt was made to send a Chinese expedition to the Roman Empire, commanded by General Ban Chao, without success.

The Han dynasty would be divided into two periods, the Western Han and the Eastern Han, with capital in Chang’an and Luoyang, respectively.

One of the least known dynasties in China was the Jin dynasty, which after the Three Kingdoms Period managed to seize the power of the Kingdom of Wei, expelling the Cao family. Later, the Jin conquered the other two kingdoms, Shu and Wu.

But this reunification of China would not last long, as the peoples and tribes of the north were increasingly threatening the Jin Empire. These warrior tribes would conquer the capitals of the North, dividing the territory into the so-called Sixteen Kingdoms.

The Jin would manage to survive one more century in the South of China, with capital near the current Nanking. This resulted in an important exodus of the population from China to the south.

During the period of the Sixteen Dynasties the north of China was invaded by nomadic tribes of the steppes. These non-Chinese tribes created several kingdoms and dynasties in a century of chaos and relentless warfare.

Although of foreign origin, the rulers of the Sixteen States adopted Chinese customs and proclaimed themselves Chinese emperors and kings.

The Tuoba, another ethnic group of the steppes, would succeed in unifying northern China by defeating the Sixteen Kingdoms, founding the North Wei dynasty. Meanwhile, in southern China, the Jin dynasty continued to rule.

These two dynasties would be successively supplanted in northern and southern China by new dynasties. This new era of chaos and internal wars was called the Southern and Northern Dynasties.

A new Chinese dynasty would succeed in unifying all of China after almost 200 years of internal chaos, the Sui dynasty at the hands of Yang Jian. Although this dynasty would be ephemeral because of its tyranny, it was highly important.

During the government of this imperial Chinese dynasty, the Great Canal was built and the Great Wall of China was finished. In addition, Buddhism began to be promoted in the courts and in the cities.

Undoubtedly, one of the most important Chinese dynasties was the Tang dynasty. During this time, China experienced a flourishing in the arts, culture, poetry, religion and commerce. Contacts were initiated with Korea, Japan, India and the countries of Central Asia.

The Tang Dynasty was the golden age of Chinese poetry and literature. The best poets that China has given throughout its extensive history were born at this time; Li Bai, Du Fu, Wang Wei, and Bai Juyi among many others.

Celebrates the Journey to the West starring the Buddhist monk Xuanzang, who traveled to India and returned with an important collection of Buddhist texts. This fact greatly boosted the growth of Buddhism in China, especially by the hand of Empress Wu Zetian.

After attacks by Uighurs, Tibetans and Arabs on the borders of the Tang Empire, and after several internal rebellions, the Tang dynasty collapsed in 907.

We again see an era of chaos and internal power struggles in China. In the north there would be up to five Chinese dynasties, while in the south ten kingdoms would fight for supremacy, in a new stage known as the Five Dynasties and Ten Kingdoms.

The Five Dynasties of the North would be defeated by the Kitanes, an invading people of the North. They would found the Liao dynasty in northern China, one of the first empires to be sinned.

Although the Liao Empire was nomadic, it soon became sedentary, adopting Chinese customs and culture. Although much of the ethnic population has ended up moving to southern China. The kitan empire would end up giving the famous name of Cathay (as China was known) in Europe.

The Song dynasty would succeed in unifying most of China, with the exception of the Kingdom of Xi Xia and the Liao Empire. With capital in Kaifeng, the Song promoted art, music, culture, gastronomy and commerce.

Meanwhile, in northern China the Liao would be conquered by a new nomadic people, the Yurchen dynasty. This new dynasty forced the Song to move to southern China, on the banks of the Yangtze River.

There they made the cities flourish in important centers of maritime and terrestrial commerce, and the use of paper money and mobile printing became generalized.

But finally, the Song were conquered by the Mongols in 1279, who would become the new rulers of all China.

The Mongol Empire invaded China in 1234, first conquering the Xi Xia and later the Yurchen dynasty. But it was not until 1279 when Kublai Khan, grandson of Genghis Khan founded the Yuan dynasty in China by defeating the Song in the battle of Yamen. Now the Mongols dominated all of China without opposition.

The Mongols structured the Chinese society in ethnic strata, being them in the cusp and the ethnic Chinese have in the base. Although they were not well received in China, they managed to reopen the imperial exams and the Silk Road to foreigners like Marco Polo. In addition to allowing the religious freedom of the population.

The discontent of the Chinese population against the Mongolian elite, accompanied by several famines and plagues, led to several peasant rebellions that claimed to possess the Mandate of Heaven. The leader of one of them, Zhu Yuan Zhang, managed to defeat the Mongols and unify China. He founded the Ming dynasty in 1368, one of the most important Chinese dynasties in history.

With capital in Nanking, and later in Beijing, the Ming dynasty was characterized by patronage in the arts, especially architecture and porcelain. The Mings were also the builders of the famous Forbidden City.

At the beginning of the 16th century the Ming dynasty embarked on a series of maritime expeditions to Indonesia, India, Arabia and Africa. These expeditions of hundreds of huge merchant ships were commanded by the sailor and eunuch Zheng He, by order of Emperor Yongle, and represented a historical milestone never before realized.

The contacts with the Europeans made the Ming popularize the use of silver as an exchange currency in China. Chinese merchants obtained silver by exchanging it for porcelain, tea, silk and spices with the Portuguese in Macao, with the Spanish in Manila, and even with Japan.

The contact was so great that the Ming court allowed several orders of Christian Jesuits to settle in the heart of China.

The last Chinese dynasty was the Qing dynasty, which was founded in 1644 after an invasion by the Manchus, a nomadic people of Manchuria. Conquest was easy, as the Ming had experienced several internal revolts due to monetary crises and famines.

The Qing imposed their customs on the population, forcing people to comb their hair with the “Manchu pigtail“, and promoting their language in court. They expanded the Chinese Empire by conquering Xinjiang, Taiwan, Mongolia and Tibet, thus becoming the Chinese dynasty that most expanded its borders.

Although there was a time of cultural renaissance during the reign of Emperor Kangxi and his sons, the dynasty began to decline as the Western powers around it became stronger.

The Opium Wars and the Taiping Rebellion were severe setbacks for the Qing dynasty, as it was the first time in history that they had to cede territory to a Western power such as Great Britain.

From the middle of the 19th century everything went downhill. China had to cede Korea and Taiwan to Japan in the China-Japanese War, while ceding parts of Manchuria to Imperial Russia and its ports in the China Sea to other powers such as Germany, and France.

The discontent of the Chinese population was growing more and more due to their hatred towards the Manchu rulers, the Westerners, and the scarcity of reforms. All this, together with anti-western rebellions such as the boxers, led the last dynasty of China to disappear in 1911 after the Xinhai Revolution.

The end of dynasties in China

Later the last Qing Emperor in exile, Pu Yi, would end up being a puppet of the Japanese in Manchukuo State during World War II. The era of Chinese imperial dynasties had come to an end.