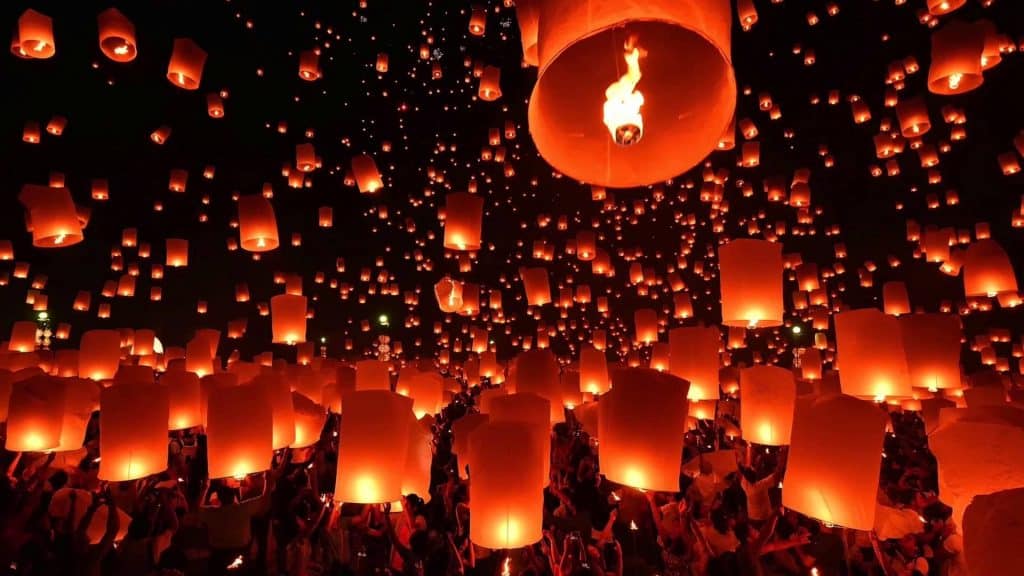 Chinese lanterns are one of the popular and typical icons of Chinese culture. We have all seen them once when entering a “Chinese food” restaurant. Also famous are the flying chinese lanterns, which are beginning to be used a lot in the West. Especially at parties like New Year’s Eve.

In this article we will show you everything you need to know about Chinese lanterns, including their history, the types there are, and how to make them or where to buy them.

We don’t know for sure when Chinese lanterns were invented. But it is estimated that it was about 1800 years ago, during the Han Dynasty in the history of China. These began to be used for decorative purposes. With drawings of landscapes, animals, gods, dragons, phoenix, and flowers.

In the past, lanterns were made of bamboo and paper, although some were made of silk. There are oval and square, but the most traditional is the spherical red and gold.

Nowadays, Chinese lanterns are used all year round, but especially during the Festival of Lanterns and the Chinese New Year.

Flying Chinese lanterns are originally made of rice paper and a simple bamboo structure.

The flame inside the lantern (or singing balloon) warms the air inside and decreases the density of the balloon. In this way it gradually rises towards the sky. But when the flame goes out the balloon ends up falling.

It is said that these silk balloons were invented by General Zhuge Liang during the Three Kingdoms period. According to legend these Chinese flying lanterns were successfully used during a night battle to frighten the enemy army and drive it away.

How to make a China Flying Lamp?

Very few people know of the existence of a plant called “Chinese lantern”. This plant is originally from Japan and the name comes as a ring to the finger.

It turns out that the flower of this plant, when pollinated, begins to grow leaving a form of Chinese lantern with a small red fruit inside. This sweet fruit is edible and contains a lot of vitamin C. It is also used in traditional Chinese medicine to treat urinary tract infections and gout.

How to Make Chinese Paper Lanterns 🏮

Start by folding a piece of paper horizontally in half. Then make cuts with the scissors on this folded paper but never reach the edge of it.

Now unfold the paper, leaving it as it was at the beginning. At this point you can begin to decorate the lantern with symbols or drawings. Once you have finished decorating the lantern, join the edges with the glue.

With the tip of the pencil, make a hole on each side of the lantern. Then run a thread through both holes to place it correctly. If you make several of them you can put them all together in one string.

Here’s a Youtube video below that explains exactly and visually how to make a typical Chinese paper lantern more easily.

You want to know where to buy cheap Chinese lanterns? On Amazon, of course! Here we show you some of the ones we have found in this online store.