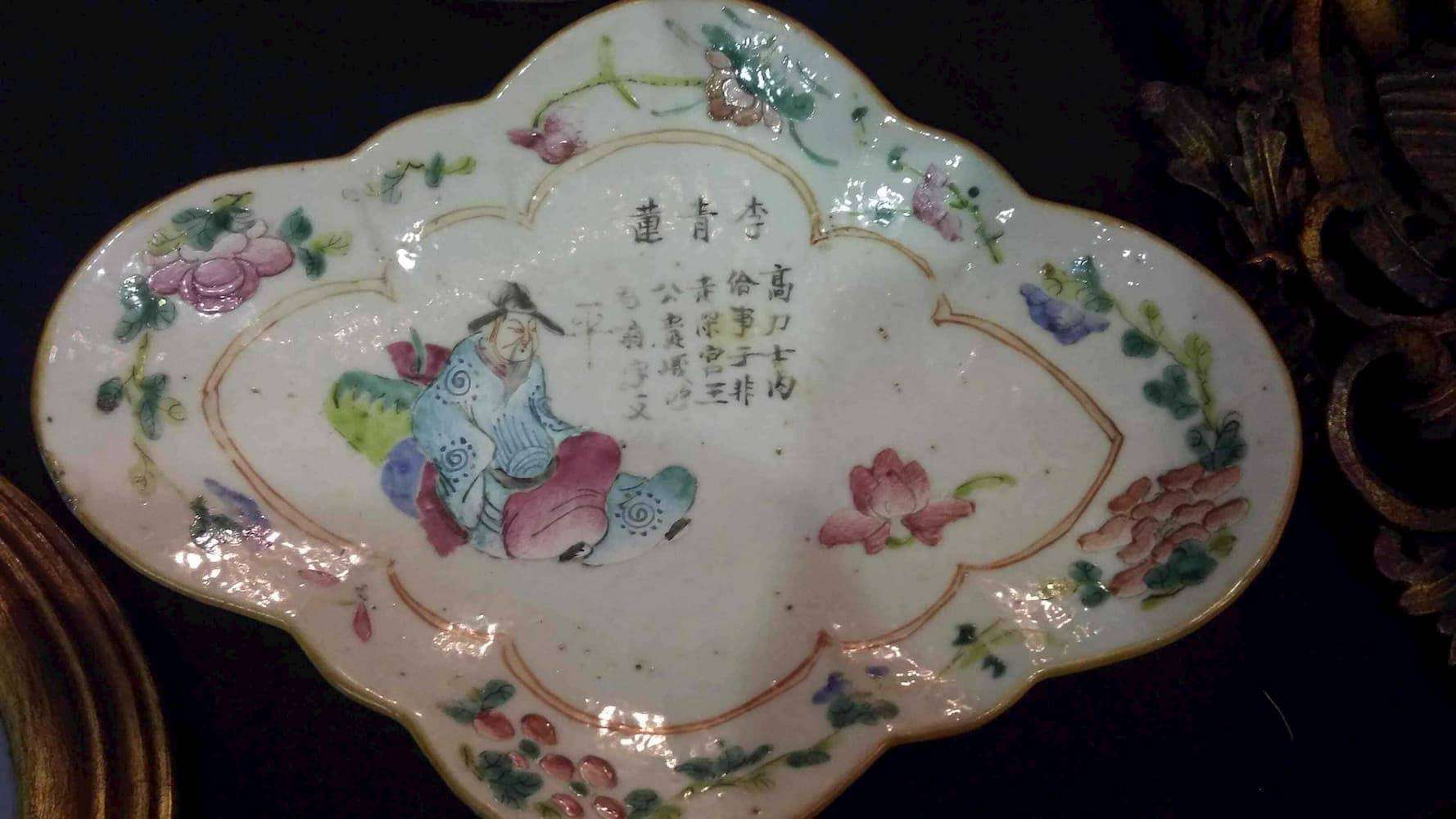 Those of you who loved the post of Chinese objects in Western homes and like chinese antiques (also called “chinerias“), are in luck.

This time, it was by chance that we were in Portugal, when we saw that there was an antique fair. The surprise upon entering was largely that the exhibits (which were for sale, by the way) were Chinese antiques.

If you go to the Velharias of the Portuguese villages it is very normal to find Chinese beauties. But this time it is the one that has impressed me the most by far.

I wonder what period these antiquities are from, where have they been? Are they chinerias created in Europe or did they really come from China?

Some may originate from the Chinese island of Macao, as it was a Portuguese colony until 1999. Ceramics were produced there and Chinese tea was bought for export to Portugal.

Therefore, today we can see many chinese antiques in the Velharias or Portuguese fairs.

What Chinese antiques have we found?

For starters, a huge chinese vase, this time with two cranes. Cranes have great cultural significance in China, symbolizing longevity and good omen.

We have also seen the two Buddha lions, always blue, a classic of Chinese antiquities.

I could write an entire entry, but what you should know is that the lion was the symbol of the family of the historical Buddha, so they represent the Buddha himself. They are placed at the entrance of Chinese buildings to ensure their spiritual protection.

A tibor with a lion. A tibor is a decorative vessel. They come in different shapes and sizes. It is decorated with a lion and plum blossoms.

A plate with a poem written and the image of the poet. The poem is entitled “Plum blue lotus”.

Ceramic figurines of two Chinese women. They are dressed in hanfu in the traditional way. Doesn’t it remind you of Disney’s Mulan trailer?

They carry musical instruments. Chinese women of the highest status used to play music for men, including their husbands.

A menshen (door gods) in the form of a bronze sculpture. They are also used to protect chinese homes. Their function and location, therefore, is the same as that of the Buddha lions.

The sculpture seems special to me because it gives a sense of movement. Because of the attitude it transmits besides its corpulent torso, I think it is a menshen and not a normal Chinese general.

One of the things that impressed me the most was the tea table with its 4 stools. It’s not a tea table because of its height, but because of its size (it doesn’t fit a whole lunch for 4 people).

The wood is sculpted in relief and painted. It shows a court scene in which a man delights in the music played by the maidens.

What surprised me the most were two chinese pieces of furniture from the same set, with beautifully sculpted wood. Look at these details that I have photographed.

The pagodas, the round garden doors, the trees, the sleeves of the gentleman who seems to be a master with his apprentice… In short, a wonder.